The moon still hung pale over Carn Bán Lake. It sneered a little then seemed to glow stronger as the snow came down in sheets. The car was slow to start it gasped and coughed until the engine finally spluttered into life. The driver was so tired and very late. He´d never wanted to leave the house but he felt obliged, obliged to be another number in a queue doomed to finish back here in the end.

New snow upon old ice! It cloaked and choked the country road, blurring the ditches and leveling the dips. The bends straightened and where they´d found old Pat dead in his overturned wreck the year before, he braked too hard and lost control.  Clutching desperately, the engine dampened and the tyres took off, they whizzed for a second then floated across the whiteness.  Time slowed; he let go.  And silently the car slid sideways down the road in the stillness of a winter morning. 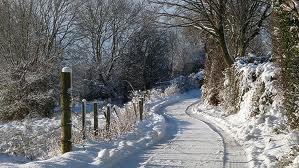 He didn´t panic, moon – hedge – T-junction – hedge, he simply closed his eyes until the music then thoughts came in steady succession. “Who will buy my sweet red roses? Two blooms for a penny, a wonderful morning. You love Oliver but what was that actor´s name, the one who played Fagin? He reminds you of your dad, dancing, singing and always smiling. How you miss those long walks on the farm, wellies disappearing in his huge footprints. Will your son think of you in the same way when you´re gone…”

His head was a hive of arcane activity, he whispered to himself as the car spun on. “Shit, you forgot the telephone bill; herself won´t be happy. Nor will she be happy when she hears about this tumour under your tongue. It doesn´t hurt but you should have told her, she´s already suspicious of these early starts and sure anyway, you´ll have to come clean in the end. Or with any luck, this will be the end.” He stopped.

The car had too its motor cut, it now pointed back in the direction of home.  He gathered himself, removed the wool cap and mopped the sweat from his brow. Relentlessly, the snow fell still in the immense silence of space. And after a moment´s consideration, he started up again, turned the car around and continued into town.

The waiting room was busy with numbers. Knowing looks and long names isolated the professionals from the non-infectious, gloves and masks from their ulcers and lumps.  There was no explanation when he opened wide his mouth, nor when the surgeon pulled his tongue first this way, then that. Few courtesies as the painless ulcer was measured and catalogued and little poetry as the expert felt excitedly for that hard swelling beneath his chin.

Old ice and new snow, he mused, “you´ll tell her this evening so”.