He switched on the bedside lamp, the clock beamed 5.22am. It was now seven minutes since the man had become acquainted with his pain, yet he still didn´t know it. His thoughts flustered over damp floorboards, the warm air forcing him outside. A streetlamp puddled rainy light upon the stairs, the bannister led down, down until he landed in the kitchen. With the first mouthful of whisky the discomfort eased and suddenly he became aware of its absence.

As the storm abated he now felt alive and tingling like an electric fence. In the toaster´s reflection he drew back his lips to see canines project from a cloud of tartar, rattling each molar without joy, the gum looked red but that could be the light and anyway his tongue had already failed to find any cavities. He finished the glass and took off again.

At the door, the queasiness returned. Square miles of waves began to roll and pitch their heaped suffering upon his lower jaw; the pain swept him back to the table. Gently cradling his head, he popped pill after bitter pill, drowning each one in alcohol. He waited for the miraculous transition but it never came. Chaos and treachery reigned. The gates of misery opened and so started a slow, monotonous descent to hell; the man dug his nails in. Then he made himself small to resist the pain however it multiplied quickly, extending its territory until throbbing radiated from above the temple all the way down his neck. 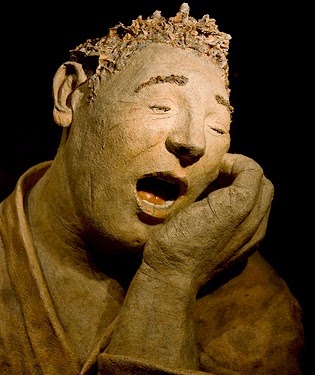 With his head flat on the table between two bags of frozen peas, he tried to stop the advance. Contorted and gasping, he struggled again for clarity. At 6.38am, the analgesic Cavalry arrived. He welcomed them, whooping and chuckling as the pain receded but he could soon tell by their poor equipment and lack of numbers that the relief wouldn´t last long; the man grabbed the phone and dialled her number.

He heard himself imploring repeatedly “Hello? Hello? Hello?” even before she´d answered. “What do YOU want” she finally responded recognising his voice “Do you know what time it is?” “You´ve got to help me, I´m in agony…please…” She cut him off, “We´ve been through this a million times”. “But, you don´t understand, my tooth is killing me, I can´t stand it any…” Before he could finish the sentence she´d hung up. When he rang back he got a high-pitched melancholic drone that penetrated his ear, down his jaw and the ache stirred again.

Back in the bedroom, it grew worse. The dentist would be open in two hours but the man knew how he´d react from painful experience, “Don´t be a coward, man, it´s only an abscess. If you can stand a small injection we´ll take it out for God´s sake”. He could see it all clearly now, he had entered a new state, the agony had revealed his reality – he was weak and completely alone.

After that, the pills didn´t taste so bitter.