Some of the worst things in life had happened to him between those sweaty walls. But like the others he kept returning. Every time he entered their veiled faces acknowledged him, at once promising everything yet always disappointing, each one reflected the others dull failures until today was yesterday and yesterday could have been tomorrow.

This morning, the bar was different; a new drinker with a bag at his feet, propped up the woodwork surrounded by the usual posse.  There were two ways you could ingratiate yourself with the early boozers - court them with tales of drunkenness or buy your way in. Given the early hour he decided this guy was a high-roller and that meant free drink. He ordered a scotch and started on the periphery to worm his way in.
Far off, the man appeared well dressed but now up close the blue suit had seen better days. The sleeves were threadbare and the shiny patches on the trousers reminded him of our brittle Irish sea. Mulling the thought along with his third whiskey, he returned to the action. “So, what do you do mate?” the local interrogated the stranger. 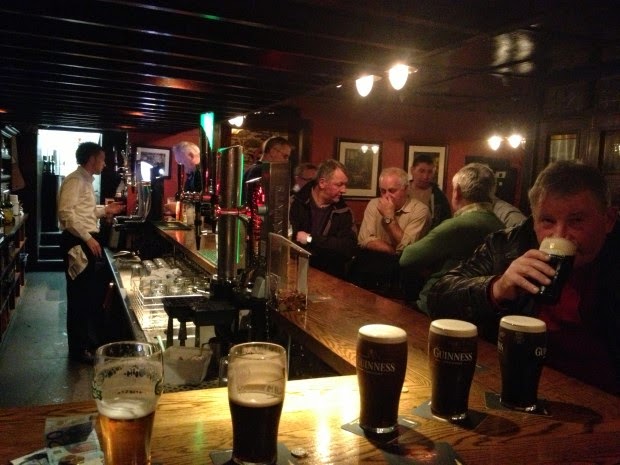 The pained expression spoke volumes. But it was already too late, he´d opened a can the morning crew knew only too well - the well-paid job, the fancy car, the private schools, then the crisis and after, redundancy, banks, bankruptcy and divorce. By the time the man had finished his dirge, the other drinkers had drifted off and now they were only two. Guilt at the question and no money, the local stayed put. “What´ll ye have mucker”, the new boy chirped up having now unburdened himself.

He rummaged and pulled out a last crumpled note. Unable to hide his disappointment the local lashed down his juice while the suit smiled and slurred, “In reality, all I have left of any value are these” pointing to his teeth and smiling broadly. So perfect and white were they Michelangelo could have carved them from Italian marble. “Jaysus mate, with teeth like that you should smile more often!” They both laughed until the drink was gone.

“If ye want more drink follow me mucker”, the visitor picked up his bag and they left. It was bright and clear outside. “Where are we headed?” the local staggered in the wake of a man on a mission. He ignored the questions until they were deep in the estate. “We´re on a salvage job”, said the suit, finally stopping outside a smart, detached house. Before the next question he´d jimmied the door and walked in. “But isn´t this illegal?” he stuttered as the stranger closed the door and then proceeded to take a crowbar and shiny hammer from his satchel.

With surgical precision he sliced and tore up the entrance wall exposing the wiring then neatly extracted it from the connections. Together they pulled it out and bunched it up. From room to room, they team-worked until the bag was full of balled-up copper wire. When they´d finished in the attic the local finally broke his silence, “This scrap will buy us a load of drink mate but don´t you feel bad for the owner?”

“No, mucker”, replied the suit, “This is my house”, and he gave his new friend that perfect white smile.