If, in public, you´re used to flipping your nipper bottom-up to sniff his latest offering or your “wheels on the bus go round and round" all the aisles of the local supermarket then you could be accused of baby bliss; that complete lack of self-awareness parents wear with such ease, as if your little one had infected you at birth. And often to reach out to him you too regress to being an infant, squeaking, gurgling, thrumming and fee-fi-fo-fumming. You develop your act, first in private, on the bed or sofa until you take it on the road. Before you know it you´re just another street act, with a captivated audience of one. One that will smile and laugh while others whisper and stare.

But don´t take your unique fan for granted as research now shows that even newborns, despite their unfocused eyes and lack of coordination, have built in body awareness and can even learn in their sleep.

At the University of London researchers showed that when healthy newborns were shown a video of another baby´s face being stroked by a soft brush, at the same time as their own face was stroked by a similar brush they showed interest. When the video was played upside-down or the stroking was time delayed, the newborns were less interested. They concluded young babies have the ability to differentiate themselves from others - when what babies see in relation to their own bodies matches what they feel they can empathise just as adults do. Another study looked at sleeping infants just 1-2 days old. Scientists played a musical tone followed by a puff of air to their eyes 200 times over the course of a half-hour. Rapidly, the newborns learned to anticipate the puff of air upon hearing the tone by tightening up their eyelids.

So what does this mean for your distracting performances? Well, you´ll have to find new material, better routines and like every entertainer gauge the audience´s reaction, as unpredictable as it may be. For example, the other day I thought I´d brighten up the baby´s mood by showing him his reflection in the mirror; it had always worked with the dog who barked and threw mid-air tilts. At first, the baby really stared as if he didn´t recognise himself, then he put his hand up to his chin like an auld boy rubbing stubble between chubby fingers. Still looking in the mirror he wasn´t rubbing, I realised he was cleaning. The rediscovered carrot was off his chin and in his mouth before I could scrape my own chin off the floor. He gave me one of his big, thoroughly entertained smiles. 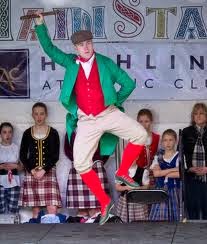 “Hey diddle diddle” seemed hollow after such a humbling experience. Like half of Ireland I had the DVD somewhere so I´d have to dig it out. Twenty years was a long time ago, worn legs and tired shoes, but it would really blow him away. It may also explain why you see your dentist jigging his Riverdance between the aisles in Tescos!